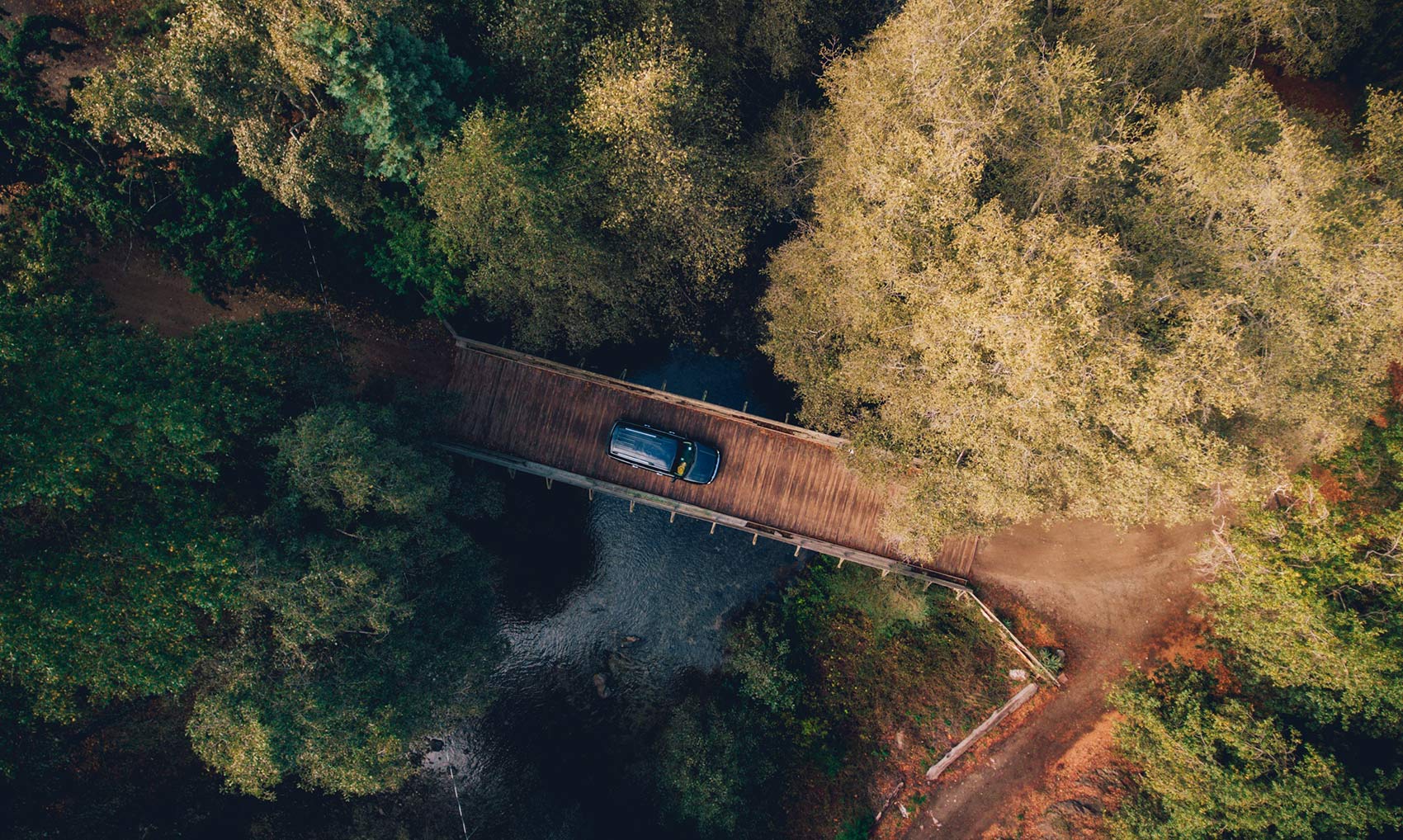 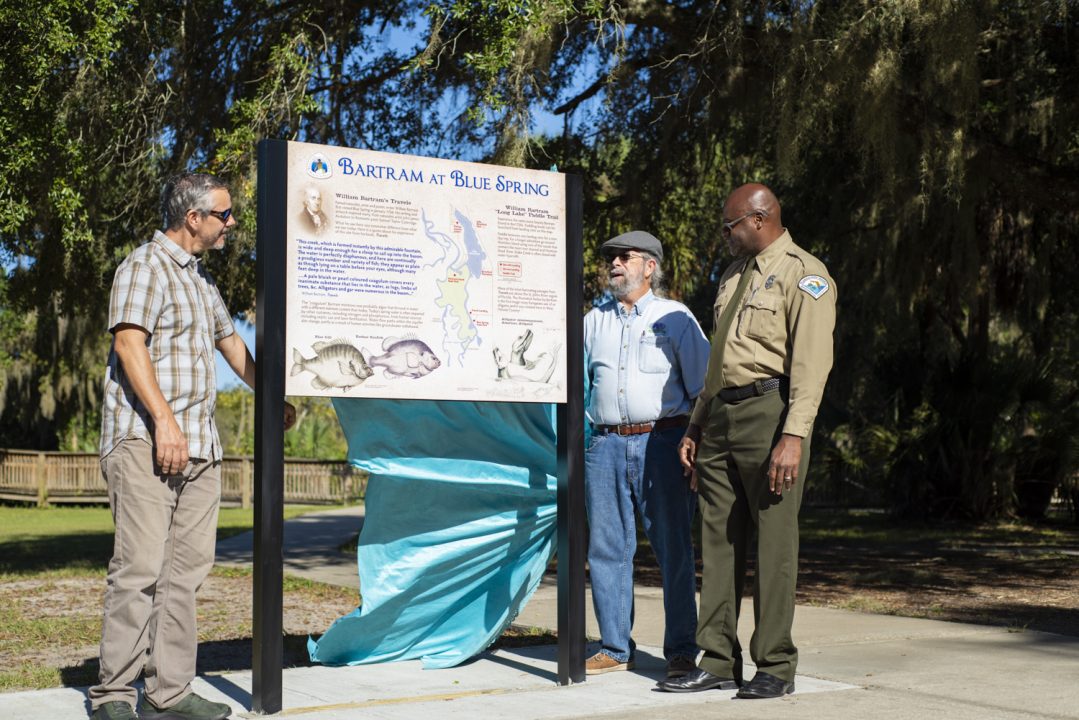 River of Lakes Heritage Corridor was excited to unveil its third kiosk at Blue Spring State Park on Friday, October 11. The kiosk is situated at a high-traffic entry area to this popular park, and visitors were already congregating there to clarify questions about the spring, where to paddle, and local history. This was the 16th panel about Bartram installed in October designed by Stephanie Liskey of Sailforth Productions. Phil, Scott, and Stephanie have enjoyed being part of the development of the Bartram Trail in Florida, a project our team embarked on in 2013 with the Bartram Trail in Putnam County group, headed up by Sam Carr.

Stephanie and Phil visited the planted “Bartram Garden” at the new Stetson Aquatic Center only a week before. That project features 15 in-ground interpretive panels. 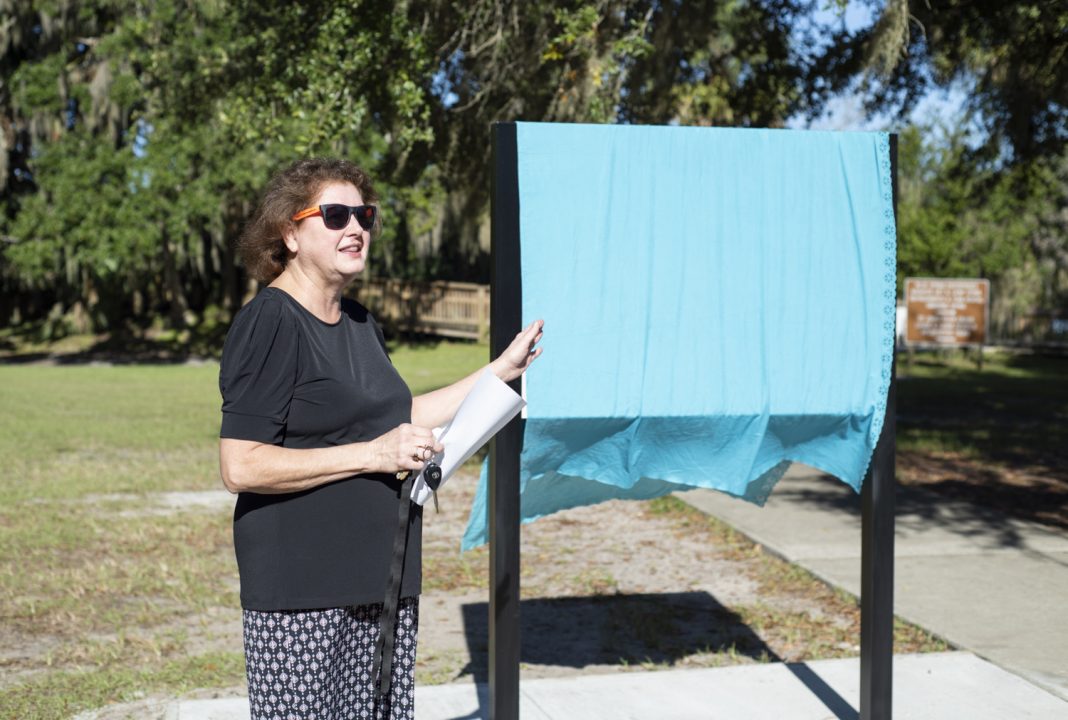 Cindy Sullivan, Chair of River of Lakes Heritage Corridor, prepares the group for the unveiling. 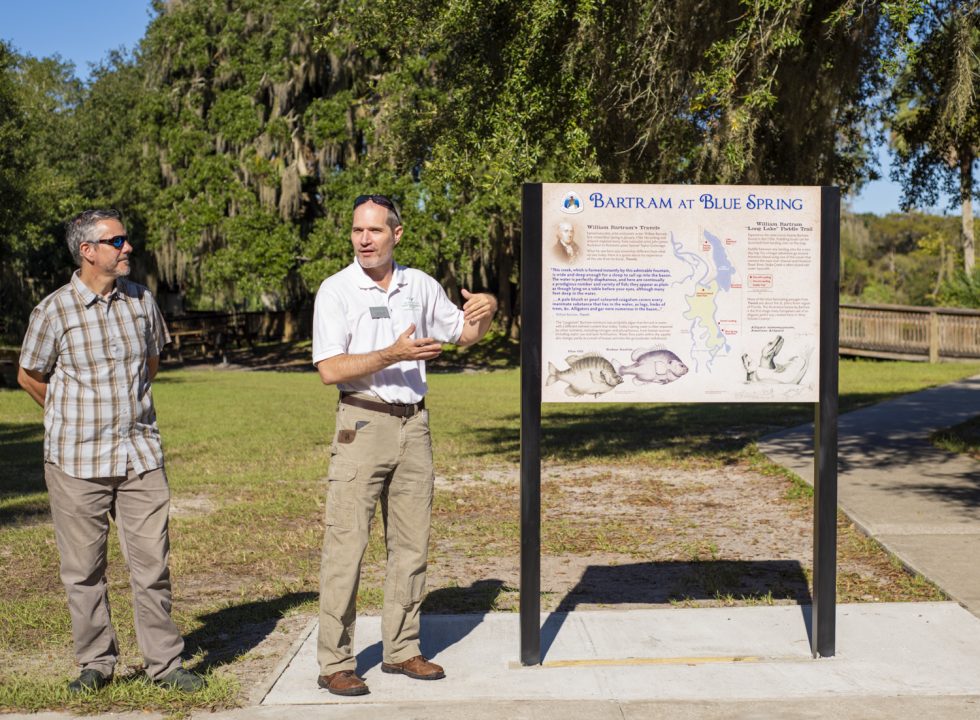 Dr. Abbott and Dr. Evans speak to the connection and sponsorship of Stetson University’s Institute for Water and Environmental Resilience.

This kiosk features a simplified map of the byway with listed highlight attractions. Many who live in the region are unaware of the byway flowing through the community. This kiosk will help raise awareness of other great sites along River of Lakes Heritage Corridor. Foreign visitors were checking it out within minutes of the unveiling. Blue Spring is popular worldwide with those who want to see the magnificent first-magnitude spring or spot manatees in a natural habitat. 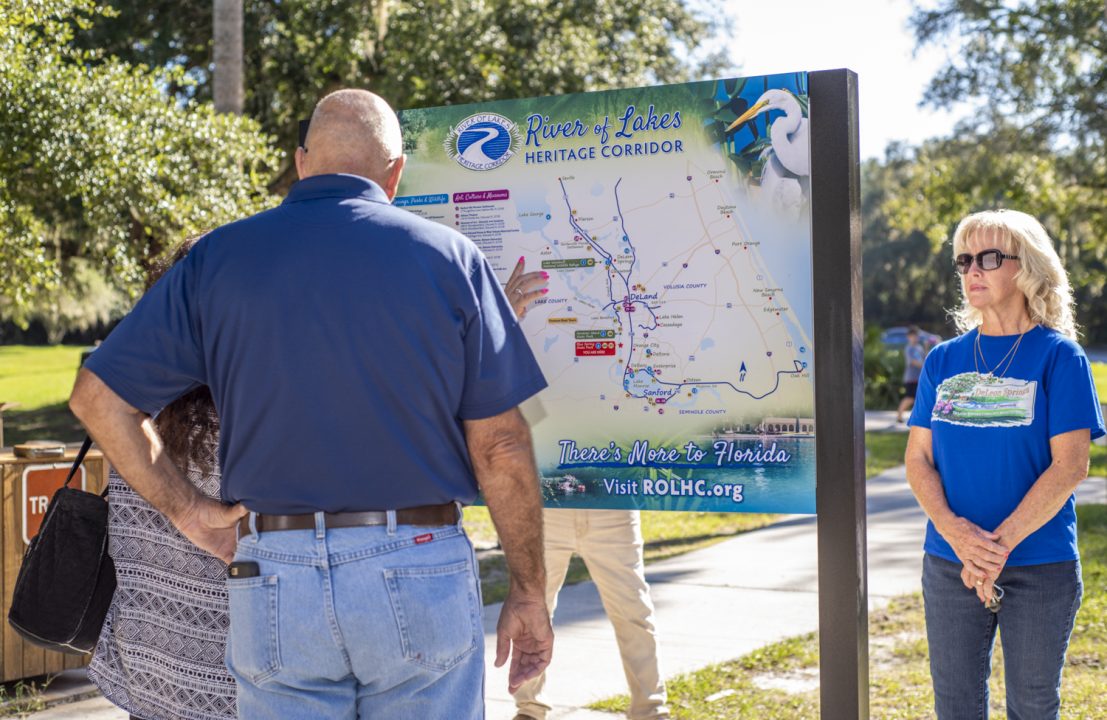 The Stetson content side of the kiosk features historic info of William Bartram at this location. Bartram and his father visited Florida in the late 1700s, and William’s classic book, Travels, was published in 1791. This book is justly famous for: 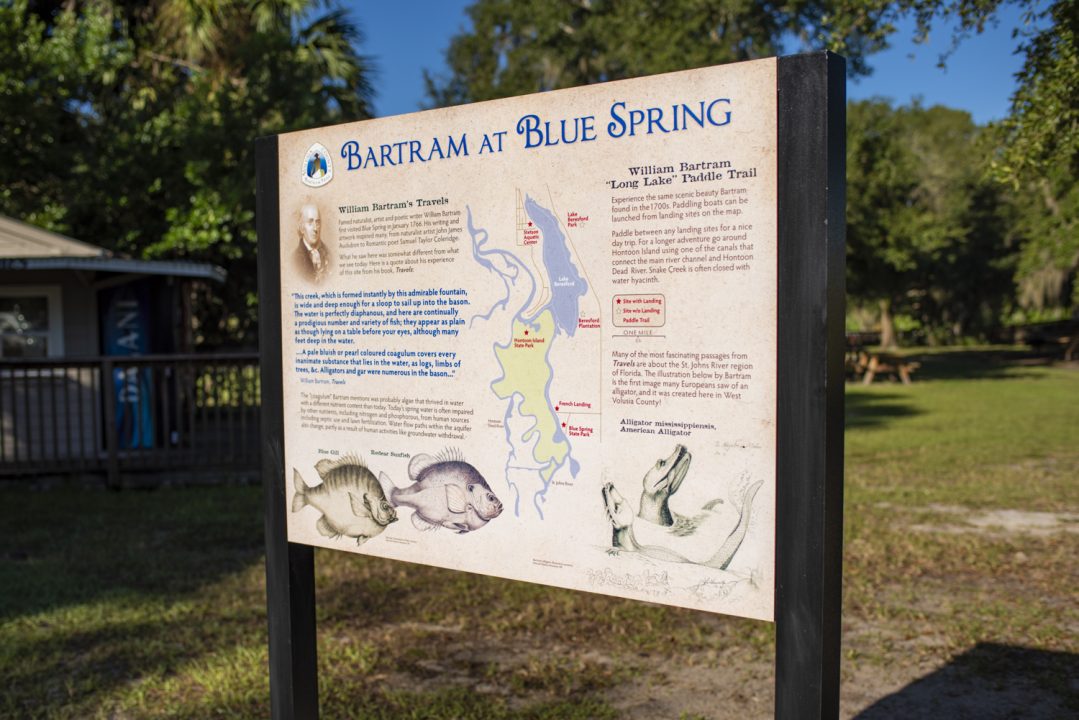 The Bartram Trail has begun to have strong interpretation in Florida, starting in 2014 with the birth of the Bartram Trail in Putnam County, Designated in 2015 as a National Recreational Trail.

Dr. Tony Abbott, chair of Geography and Environmental Science at Stetson in DeLand, attended the Bartram Frolic (a yearly festival in Palatka, FL) and Bartram lectures there. Both he and Clay Henderson were already passionate Bartram scholars. This interpretive panel is a continuation of the cross-promotion of the Bartram Trail in Florida and River of Lakes Heritage Corridor. In 2017, Dr. Abbott procured funding from Stetson for a ROLHC byway Brochure which highlighted the Bartram Sites alongside the more accessible byway locations to guide those who wanted to explore Bartram history on this historic corridor. Dr. Abbott acted as the author and subject-matter expert on this brochure and the ensuing interpretive panel, with input from his peers in the Stetson Environmental Science dept. 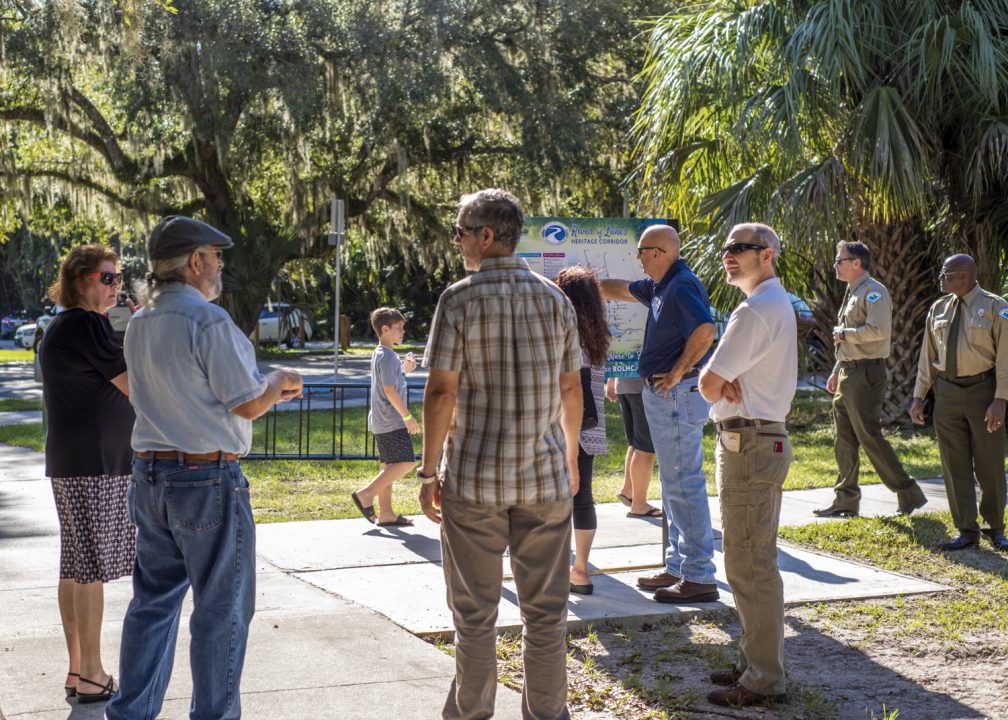 The Blue Spring Kiosk pares down some of those key Bartram locations from the map brochure in Volusia near Blue Spring and shows a “Long Lake Paddling Trail” to follow in Bartram’s wake. 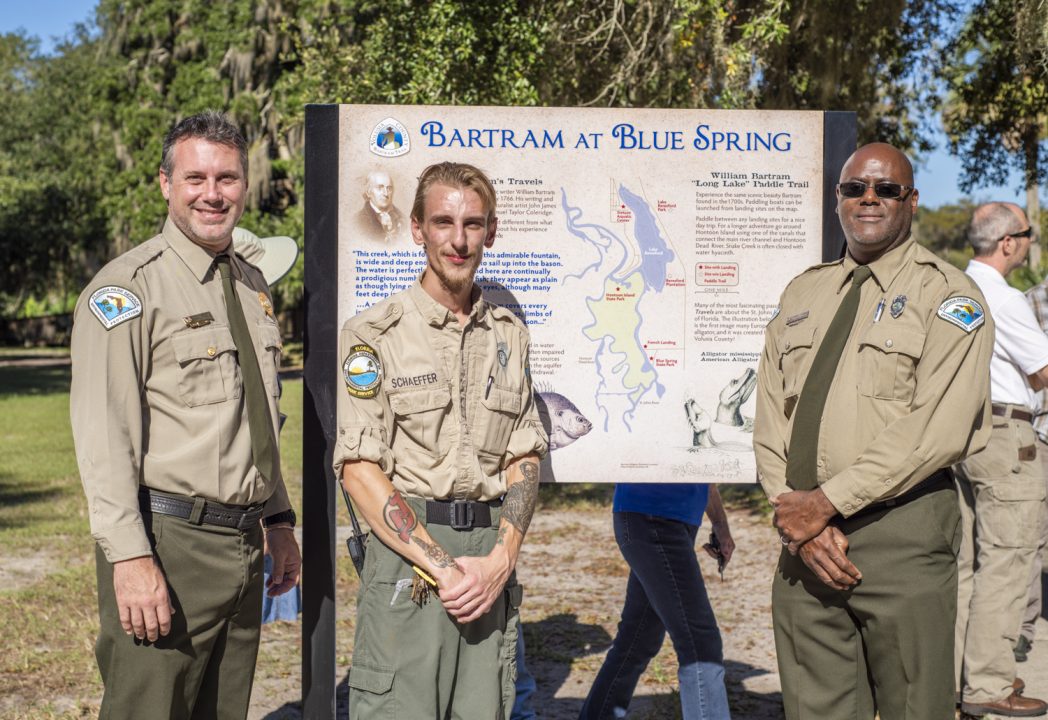 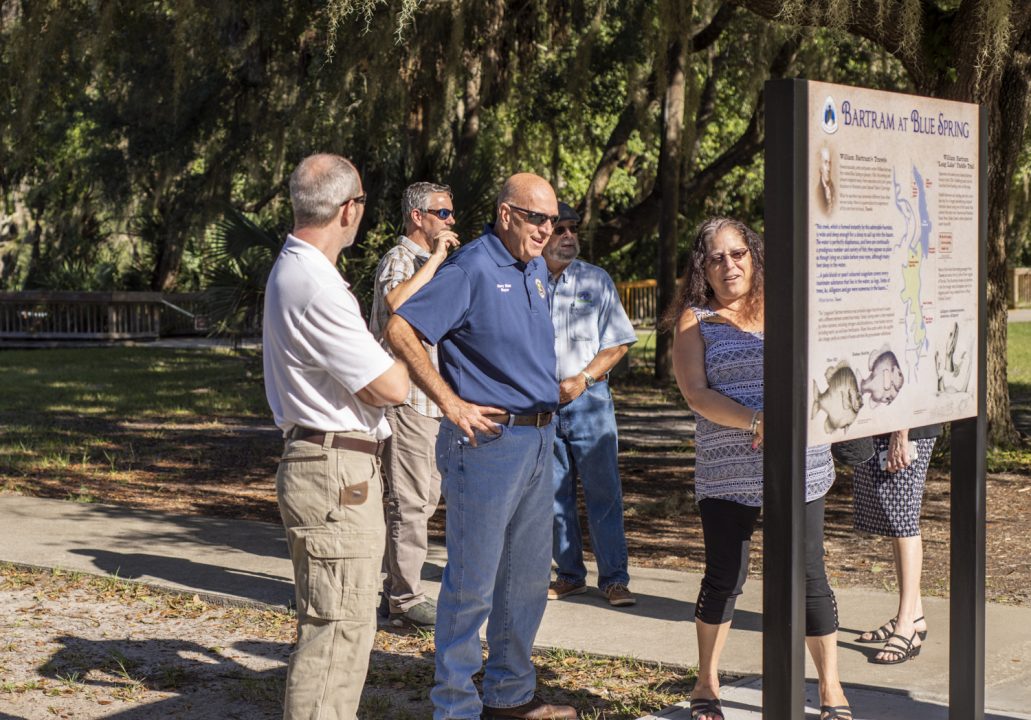 River of Lakes has other kiosks lining up and has worked hard to build relationships and partnerships in the region to the benefit of all parties. Each kiosk finds a new partner along the byway. Sailforth is grateful to be a part of the River of Lakes and Bartram teams. Each project is meaningful and connects us with fascinating history, beautiful places, and passionate stewards of our cultural and natural legacy. 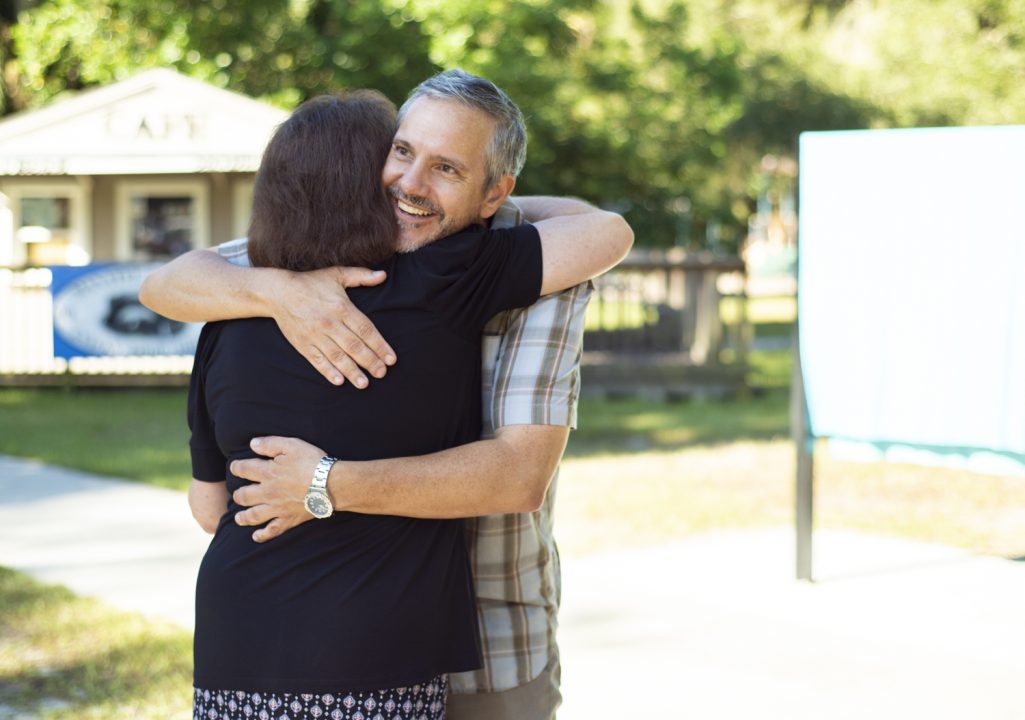 Cindy shares a hug with Dr. Tony Abbott – they are both excited at this long-brewing project now finalized and in the ground.